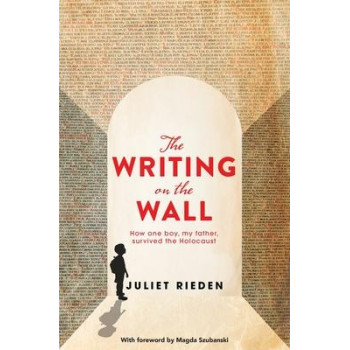 Writing on the Wall,The

'Memoirs such as this will ensure we do not lose the struggle against "forgetting" - that sly accomplice of tyranny' Magda Szubanski In 1939, as Hitler's troops march on Prague, a Jewish couple makes a heartbreaking decision that will save their eight-year-old son's life but change their family forever. Australian journalist Juliet Rieden grew up in England in the 1960s and 70s always sensing that her family was different in some way. She longed to have relatives and knew precious little about her Czech father's childhood as a refugee. On the night before Juliet's father died, in 2006, Juliet's father suddenly looked up and said: 'The plane is in the hangar.' In the years after his death, Juliet comes to truly understand the significance of these words. On a trip to Prague she is shocked to see the Rieden name written many times over on the walls of the Pinkas Synagogue memorial. These names become the catalyst for a life-changing journey that uncovers a personal Holocaust tragedy of epic proportions. Juliet traces the grim fate of her father's cousins, aunts and uncles on visits to Auschwitz and Theresienstadt concentration camps and learns about the extremes of cruelty, courage and kindness. Then in a locked box in Britain's National Archives, she discovers a stash of documents including letters from her father that reveal intimate details of his struggle. Meticulously researched and beautifully told, this is the moving story of a woman's quest to piece together the hidden parts of her father's life and the unimaginable losses he was determined to protect his children from.