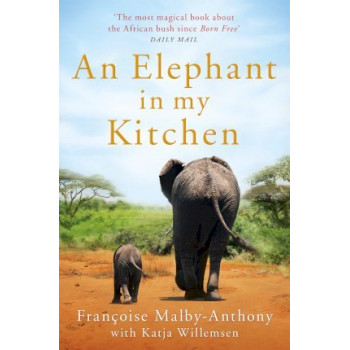 An Elephant in My Kitchen

"The most magical book about the African bush since Born Free." Daily Mail A blonde, chic Parisienne, Francoise never expected to find herself living on a South African game reserve. But when she fell in love with renowned conservationist Lawrence Anthony her life took an unexpected turn. Lawrence died in 2012 and Francoise was left to face the tough reality of running Thula Thula without him, even though she knew very little about conservation. She was short on money, poachers were threatening their rhinos, and one of their elephants was charging Land Rovers on game drives and terrifying guests. There was no time to mourn when Thula Thula's human and animal family were depending on her. How Francoise survived and Thula Thula thrived is beautifully described in this charming, funny and poignant book. Their elephant herd, rescued by Lawrence, shared Francoise's grief at his passing but over time forged a new relationship with her. One day a baby, Tom, became separated from the herd and found his way into Francoise's kitchen. Another day there was a desperate race against time to save a baby who had a snare wrapped round his face and couldn't open his mouth to suckle. Meanwhile Francoise fulfilled her dream of building a rescue centre for orphaned rhinos and other wildlife. Abandoned hippo baby Charlie, who hated water, joined the centre's rhinos and quickly became best friends with a little girl rhino called Makhosi. The traumatised babies had round the clock care, including an unlikely nursemaid in the form of a German Shepherd called Duma. If you loved Lawrence's The Elephant Whisperer, or just want to spend time with some very special animals, then you won't want to miss this sparkling book.