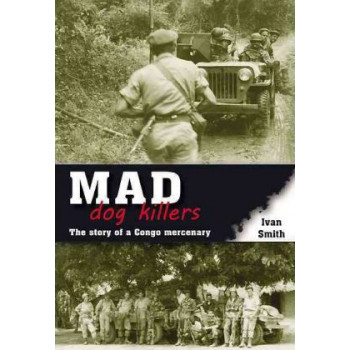 Mad Dog Killers: The Story of a Congo Mercenary

During that long, hot summer of 1964, Ivan Smith, a mercenary volunteer in the Armee Nationale Congolais, came to witness and understand fear, the law of the jungle and the lust for killing that permeates Africa. A member of 'Mad Mike' Hoare's 5 Commando Group, he and his companions were nominally soldiers but there was little in the way of campaigns, tactics and discipline. Of conventional warfare there was none. Loyalty to country or unit did not exist and the fear of death was the only commander. Many more mercenaries died from an accidental discharge, in a drunken shoot-out or from a bullet in the back than were ever killed in action by Simba rebels. Nearly half a century later, Ivan Smith re-lives the nightmare that was the Congo. About the Author Ivan Smith was born 1941 in Fort Victoria, Rhodesia. He grew up on a farm before doing his national service after leaving school in 1958. After some cowboy and mining work he spent two years in London and Copenhagen. In 1964 he signed up for a six-month contract as a mercenary in the Congo. He joined the British South Africa Police in 1965 and served fourteen years in the paramilitary Support Unit and the Police Anti-Terrorist Unit during the protracted Rhodesian 'bush war'. He emigrated to South Africa in 1984 where he worked in the security department at the University of Cape for 16 years. A lover of hunting and fishing, he has written for various outdoor magazines for over 40 years. He lives in the small village of Joubertina in the Western Cape of South Africa.