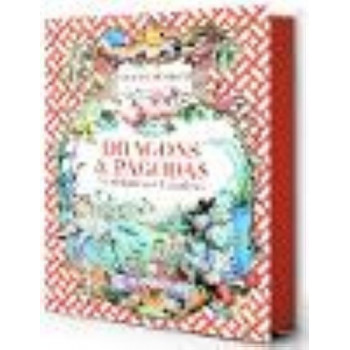 Chinoiserie is a term for Western art and design inspired by a largely invented vision of China. Marco Polo's sensational account of his visit to the exotic East in the thirteenth century sparked an insatiable demand for knowledge of China. The feeling was not mutual, however, and the Chinese kept the Western "barbarians" at arm's length. By the eighteenth century, piecemeal reports about the country filled with hearsay and myth were eagerly disseminated across Europe, and fascination with China reached a fever pitch. Everything that found its way out of China was highly prized, from blue-and-white porcelain vases to lacquer screens to precious tea leaves. But because a clear vision of the country was perpetually shrouded in mystery, Westerners reveled in the fanciful interpretations of Chinese life churned out by artists, and chinoiserie was born, first in Holland and soon in France, Germany, and England, where it was most successfully absorbed into mainstream fashion. Indeed, "Chinese Chippendale"-style fretwork railings and bridges flooded the gardens of England and proved even more popular in its North American colonies. Aldous Bertram has been captivated by chinoiserie all his life and even wrote his doctoral thesis at Cambridge University on Chinese pavilions in English gardens. He organizes Dragons & Pagodas by theme, including porcelain, color and pattern, flora, fauna, people, architecture, and tropical exoticism. Each chapter is bursting with images of everything from grand European summer palaces and whimsical pagoda follies to charming details of screens, porcelain figurines, and ornate plasterwork, from modern rooms swathed in floral wallpaper to paintings, tapestries, and palm-topped columns. Complete with Bertram's own chinoiserie-inspired watercolors and collages, Dragons & Pagodas is an irresistible confection and an example of chinoiserie in its own right.