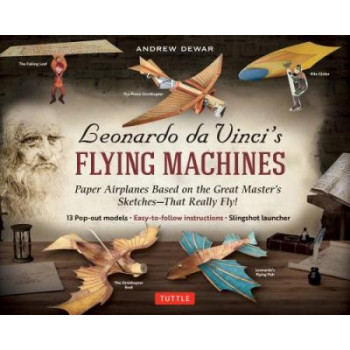 Visionary Renaissance genius Leonardo da Vinci designed and sketched many inventions that were centuries ahead of their time. He was obsessed with flight theory and aerodynamics, so many of his drawings were of innovative flying machines most of which were never built during his lifetime. They existed only as ideas in da Vinci's fertile imagination and as sketches in his famous notebooks until now! This remarkable new collection of paper plane models by renowned paper artist Andrew Dewar presents replicas of 13 of Leonardo's most famous aviation inventions most of which actually fly! This kit includes: Pre-cut paper pieces for 13 different machines based on Leonardo's most original designs A full-colour 64-page book with step-by-step instructions for assembling the flying machine models A pre-assembled rubber band slingshot launcher used to launch the planes into the sky