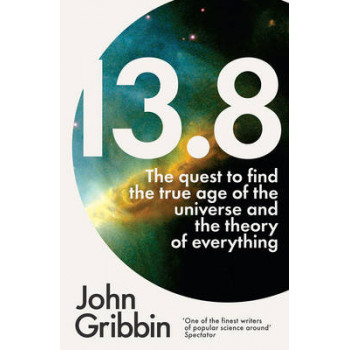 13.8: The Quest to Find the True Age of the Universe and the Theory of Everything

The 20th century gave us two great theories of physics: the general theory of relativity, which describes the behaviour of things on a very large scale, including the entire Universe; and quantum theory, which describes the behaviour of things on a very small scale, the sub-atomic world. The refusal of the Universe to reveal an equation that combines these two great ideas has caused some people to doubt our whole understanding of physics. In this landmark new book, popular science master John Gribbin tells the dramatic story of the quest that has led us to discover the true age of the Universe (13.8 billion years) and the stars (just a little bit younger). This discovery, Gribbin argues, is one of humankind's greatest achievements and shows us that physics is on the right track to finding the 'Theory of Everything'. 13.8 provides an eye-opening look at this cutting-edge area of modern cosmology and physics, and tells the compelling story of what modern science has achieved - and what it can still achieve.