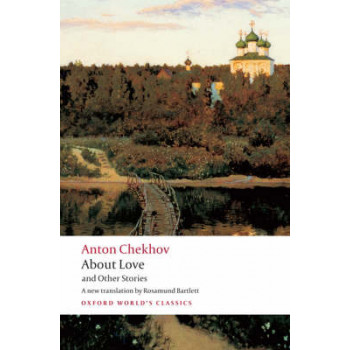 About Love and Other Stories

'the greatest short story writer who has ever lived' Raymond Carver's unequivocal verdict on Chekhov's genius has been echoed many times by writers as diverse as Katherine Mansfield, Somerset Maugham, John Cheever and Tobias Wolf. While his popularity as a playwright has sometimes overshadowed his achievements in prose, the importance of Chekhov's stories is now recognized by readers as well as by fellow authors. Their themes - alienation, the absurdity and tragedy of human existence - have as much relevance today as when they were written, and these superb new translations capture their modernist spirit. Elusive and subtle, spare and unadorned, the stories in this selection are among Chekhov's most poignant and lyrical. They include well-known pieces such as 'The Lady with the Little Dog', as well as less familiar work like 'Gusev', inspired by Chekhov's travels in the Far East, and 'Rothschild's Violin', a haunting and darkly humorous tale about death and loss. ABOUT THE SERIES: For over 100 years Oxford World's Classics has made available the widest range of literature from around the globe. Each affordable volume reflects Oxford's commitment to scholarship, providing the most accurate text plus a wealth of other valuable features, including expert introductions by leading authorities, helpful notes to clarify the text, up-to-date bibliographies for further study, and much more.