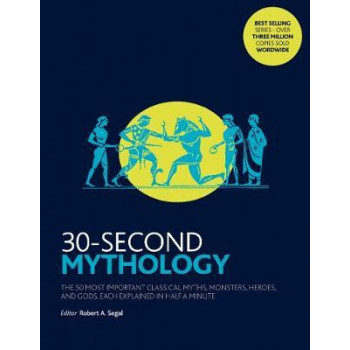 30-Second Mythology: The 50 Most Important Classical Gods and Goddesses, Heroes and Monsters, Myths and Legacies

The 30-Second...series takes a revolutionary approach to learning about those subjects that you feel you should really understand. Each idea, no matter how complex, is explained using a mere two pages, 300 words, and one picture: all easily digested in only half a minute. 30-Second Mythology offers the shortest path to a world of gods and monsters. So much modern culture traces its origins back to Greek and Roman mythology (witness 2010's Clash of the Titans and Percy Jackson and the Olympians). The stories provide wonderful references to make your conversation more heroic and lift your imagination closer to the gods. Sail through these fifty 30-second legends to discover what Hercules did to deserve his twelve labours, why Odysseus took ten years to travel 500 miles, and how Narcissus found the love of his life. The perfect reference book for creative writers, it covers gods and goddesses, heroes and monsters, story locations and the great storytellers. There are also condensed versions of the tragic tales alongside explanations of their modern legacies: from the Oedipus Complex to the Narcissus Syndrome.