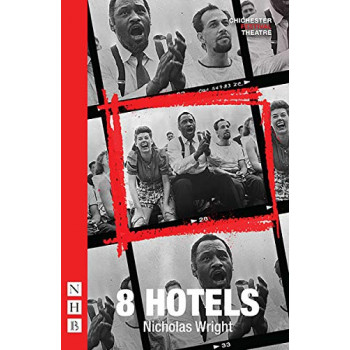 'Iago only suspected it. I know.' Celebrated actor, singer and political campaigner Paul Robeson is touring the United States of America as Othello. His Desdemona is the brilliant young actress Uta Hagen. Her husband, the Broadway star Josa Ferrer, plays Iago. The actors are all friends, but they are not all equals. As the tour progresses, onstage passions and offstage lives begin to blur. Revenge takes many forms and in post war America it isn't always purely personal ' it can be disturbingly political too. Based on true events, Nicholas Wright's play 8 Hotels was first staged at the Minerva Theatre, Chichester, in 2019, in a production directed by Richard Eyre. 'Packed with intense passions... intelligent entertainment' - Broadway World 'Elegantly provocative, alive with wiry delicacy' - Independent 'Compelling' - WhatsOnStage 'A fascinating slice of American theatrical and political history, which Wright has richly mined for its interconnections... ingenious' - Exeunt Magazine 'Explores with great subtlety the complexities of an infernal triangle' - Guardian