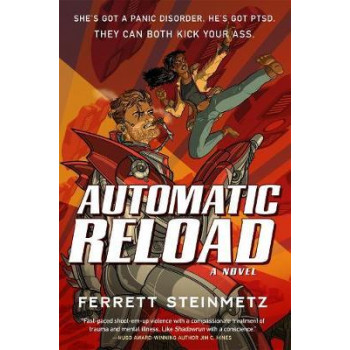 In the near-future, automation is king, and Mat is the top mercenary working the black market. He's your solider's solider, with military-grade weapons instead of arms-and a haunted past that keeps him awake at night. On a mission that promises the biggest score of his life, he discovers that the top secret shipment he's been sent to guard is not a package, but a person: Silvia. Silvia is genetically-altered to be the deadliest woman on the planet-her only weakness is her panic disorder. When Mat decides to free her, both of them become targets of the most powerful shadow organization in the world. They go on the lam, determined to stop a sinister plot to create more super assassins like Silvia. Between bloody gunfights, rampant car chases and drone attacks, Mat and Silvia team up to survive...and unexpectedly realize their messed up brain-chemistry cannot overpower their very real chemistry. Automatic Reload is the genre's most unexpectedly heartfelt romantic comedy with explosions, perfect for fans of Die Hard and Mr. and Mrs. Smith.