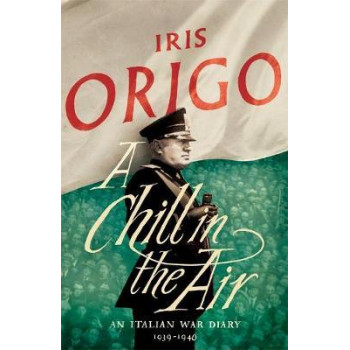 War in Italy in 1939 was by no means necessary, or even beneficial to the country. But in June 1940, Mussolini finally declared war on Britain and France. The awful inevitability with which Italy stumbled its way into a war for which they were ill prepared and largely unenthusiastic is documented here with grace and clarity by one of the twentieth century's great diarists.This diary, which has never been published and was recently found in Origo's archives, is the sad and gripping account of the grim absurdities that Italy and the world underwent as war became more and more unavoidable. Iris Origo, British-born and living in Italy, was ideally placed to record the events: extremely engaged with the world around her, connected to people from all areas of society (from the peasants on her estate to the US ambassador to Italy), she writes of the turmoil, the danger, and the dreadful bleakness of Italy in 1939-1940, as war went from a possibility to a dreadful reality.A Chill in the Air covers the beginning of a war whose catastrophic effects are documented in the bestselling War in Val D'Orcia.