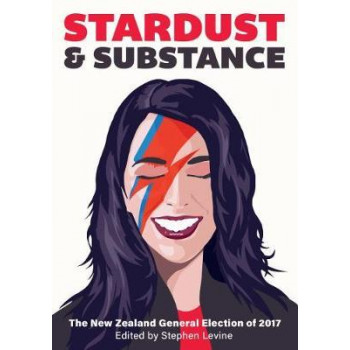 Stardust and Substance: The New Zealand General Election of 2017

Stardust and Substance captures some of the magic of Jacinda Ardern's extraordinary seven-and-a-half weeks' campaign, defeating a National government in power for nine years. The story of her sensational achievement - with `relentless positivity' and a `Let's do this' attitude - is told in this book by multiple authors, including Jacinda Ardern herself; her coalition partners, Winston Peters and James Shaw; and, looking back at the 2017 race, by her adversary in the campaign, former prime minister Bill English. The book portrays how a remarkable election looked: * to overseas observers in the U.S., Australia, Europe, Britain and Japan, attempting to understand `Jacindamania'. * to 14 of New Zealand's top cartoonists. * to academic commentators, journalists and a TV news programme's producer. Stardust and Substance tells the story of how the election was won, and a government formed, its chapters highlighting: * the televised debates and Jacinda Ardern's inspirational example for New Zealand's young women. * UMR's survey findings about leadership, issues and `word clouds'. * the post-election negotiations with Winton Peters. * the role of political scandals. * the campaign and election in the Maori seats. * the 2017 election and New Zealand's Pacific communities. * four campaigns, four candidates - Julie Anne Genter (Greens); Chris Hipkins (Labour); Mark Mitchell (National); Fletcher Tabuteau (New Zealand First). Stardust and Substance also farewells the Key-English government, examining its legacy with regard to some key issues: New Zealand's flag; the economy, housing, the environment, immigration, foreign policy and security. Stardust and Substance is the latest title in a VUP series of New Zealand election studies allowing New Zealanders today and `in 20, 50 and 100 years' time' the opportunity to `think about what happened and why' (John Key) at the country's general elections.