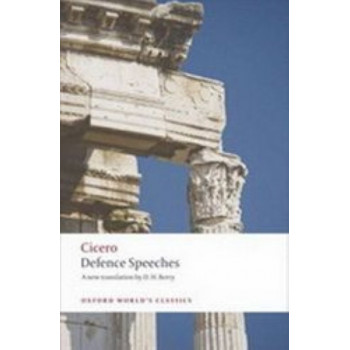 'But I must stop now. I can no longer speak for tears - and my client has ordered that tears are not to be used in his defence.' Cicero (106-43 BC) was the greatest orator of the ancient world: he dominated the Roman courts, usually appearing for the defence. His speeches are masterpieces of persuasion: compellingly written, emotionally powerful, and somtimes hilariously funny. This book presents five of his most famous defences: of Roscius, falsely accused of murdering his father; of the consul-elect Murena, accused of electoral bribery; of the poet Archias, on a citizenshiup charge; of Caelius, ex-lover of Clodia Metelli, on charges of violence; and of Milo, for mudering Cicero's hated enemy Clodius. Cicero's clients were rarely whiter-than-white; but so seductive is his oratory that the reader cannot help taking his side. In these speeches we are plunged into some of the most exciting courtroom dramas of all time. These new translations preserve Cicero's literary artistry and emotional force, and achieve new standards of accuracy. Each speech has its own introduction, and a general introduction discusses Cicero's public career and the criminal courts.The substantial explanatory notes guide the reader through the speeches, and offer new scholarship presented in a clear way.