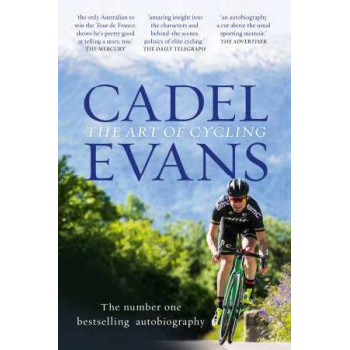 The bestselling autobiography of a cycling legend and winner of the 2011 Tour de France On the afternoon of Sunday, the first of February 2015, Cadel Evans crossed the finish line in the first-ever race of the event that would immortalise his name: the Cadel Evans Great Ocean Road Race. At that moment, an extraordinary cycling career, spanning 20 years and more than 750 professional races, came to a close. Now, looking back on his journey, Cadel Evans tells his story of the races and moments that mattered. Ranging from the dirt tracks of his early 1990s mountain-biking days to the Tour de France's famous podium in 2011 and beyond, The Art of Cycling is a tale of potential realised and ambition fulfilled. It's also the inspiring story of a young boy from the Australian bush, whose focus, talent and dedication conquered the elite world of international cycling in an era when few Australians competed, let alone won. Famous in the sport for his meticulous preparation and as an athlete who prided himself on his ability to give his all, Evans writes with forensic detail about the triumphs, the frustrations, the training, the preparation, the psychology of the sport, his contemporaries, the legends, the controversies and, above all, his enduring love of cycling.