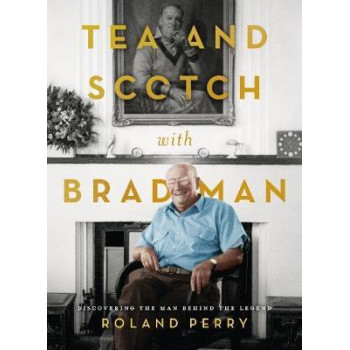 Tea and Scotch with Bradman

Discovering the man behind the legend 'Conversations with Bradman were, like his batting, never dull and often unpredictable.' - From the Introduction In 1995, journalist and author Roland Perry wrote to Sir Donald Bradman requesting a face-to-face interview for a biography he was planning of the great cricketer. Surprisingly, the Don agreed. For Perry, those days spent speaking with Bradman at the former cricketer's quiet home in suburban Adelaide were the beginning of a conversation that continued for years. Throughout, the real Bradman shone, not only as a great sportsman but as a brilliant thinker, a man of integrity, a humourist and musician with a fondness for tea and a Scotch or two. In Tea and Scotch with Bradman, Perry paints an intimate and revealing portrait of the man many regard as the greatest Australian cricketer of all time. Accompanying his engaging narrative are a selection of rare photographs taken by acclaimed photographer Dean Golja during Perry's initial interviews at Bradman's home, many of which have never been seen or previously published.