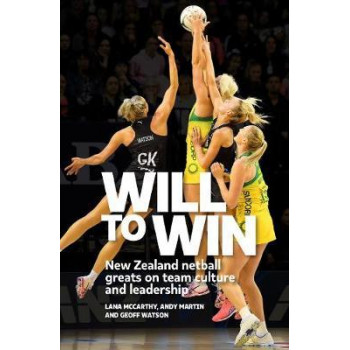 Will to Win: New Zealand netball greats on team culture and leadership

A fascinating deep-dive into the development of the Silver Ferns' traditions, the evolution of team culture and the nuts-and-bolts of leadership at an elite sporting level. The 12 legendary players and coaches interviewed - including Lois Muir, Leigh Gibbs, Sandra Edge, Bernice Mene, Ruth Aitken and Casey Kopua - candidly discuss the highs and lows of their careers, and of the Silver Ferns, the effect of the intense rivalry with Australia, coping with gut-wrenching losses, and the resilience of players and coaches. For the first time the perspective of these key actors is the subject of serious analysis, and the book is a real insight into the psychology of a women's highperformance team. As such, it provides a practical guide for developing team culture and leadership for netball coaches at all levels. It also includes comments from Farah Palmer and Noeline Taurua on women in sport and leadership, and a brief history of New Zealand netball, including the gains and losses as netball moved into a semi-professional era, and the struggles for sponsorship and for media recognition, despite it being New Zealand's most popular team sport.