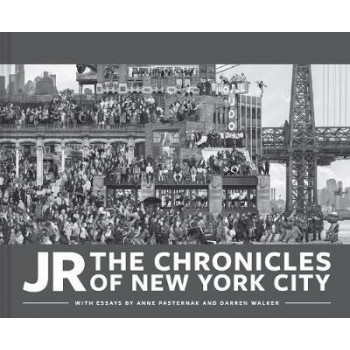 JR is a groundbreaking figure in contemporary art. His oversize black-and-white portraits adorn walls, pavements, and rooftops from the suburbs of Paris to the favelas of Rio. With his ongoing Chronicles series, he aims to capture the essence of cities in words and images. He began with a suburb of his native Paris and expanded upon the project in San Francisco. Now, he has set his sights on New York, where he lives part-time. In 2018, JR set out on the streets of New York with his mobile photo studio. Over 1,000 New Yorkers showed up to tell their stories, pose for the camera, and become part of this extraordinary project. Inspired by the work of Diego Rivera, JR then compiled the hundreds of individual portraits into an astounding mural, a portrait of the city, and installed it at the Brooklyn Museum in 2019. This book tells the story of how the mural was made. It includes over 1,000 individual portraits, selected first-person accounts from participants, behind-the-scenes photos, a foreword by JR, a foreword by a major figure in the New York art scene (to be confirmed), and a removable poster of the mural tucked in a pocket on the inside front cover. Like the mural itself, the book is a dynamic, diverse, and heartfelt celebration of New York City and its people.