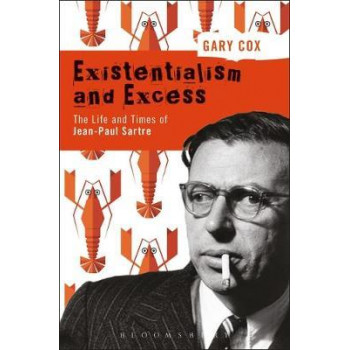 Existentialism and Excess: The Life and Times of Jean-Paul Sartre

Jean-Paul Sartre is an undisputed giant of twentieth-century philosophy. His intellectual writings popularizing existentialism combined with his creative and artistic flair have made him a legend of French thought. His tumultuous personal life - so inextricably bound up with his philosophical thinking - is a fascinating tale of love and lust, drug abuse, high profile fallings-out and political and cultural rebellion. This substantial and meticulously researched biography is accessible, fast-paced, often amusing and at times deeply moving. Existentialism and Excess covers all the main events of Sartre's remarkable seventy-five-year life from his early years as a precocious brat devouring his grandfather's library, through his time as a brilliant student in Paris, his wilderness years as a provincial teacher-writer experimenting with mescaline, his World War II adventures as a POW and member of the resistance, his post-war politicization, his immense amphetamine fueled feats of writing productivity, his harem of women, his many travels and his final decline into blindness and old age. Along the way there are countless intriguing anecdotes, some amusing, some tragic, some controversial: his loathing of crustaceans and his belief that he was being pursued by a giant lobster, his escape from a POW camp, the bombing of his apartment, his influence on the May 1968 uprising and his many love affairs. Cox deftly moves from these episodes to discussing his intellectual development, his famous feuds with Aron, Camus, and Merleau-Ponty, his encounters with other giant figures of his day: Roosevelt, Hemingway, Heidegger, John Huston, Mao, Castro, Che Guevara, Khrushchev and Tito, and, above all, his long, complex and creative relationship with Simone de Beauvoir. Existentialism and Excess also gives serious consideration to Sartre's ideas and many philosophical works, novels, stories, plays and biographies, revealing their intimate connection with his personal life. Cox has written an entertaining, thought-provoking and compulsive book, much like the man himself.