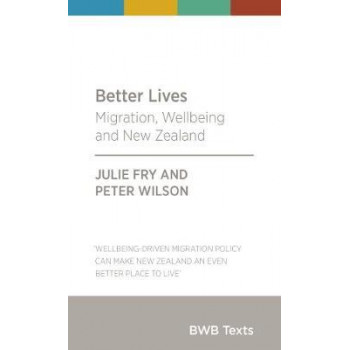 "Better Lives provides a comprehensive overview of immigration in New Zealand, showing how immigration is not just an economic imperative that needs to be managed, but an opportunity to enhance people's lives. This book shifts immigration debate in Aotearoa in exactly the right direction." Dr Arama Rata (Ngati Maniapoto, Taranaki, Ngaruahine), NIDEA (National Institute of Demographic and Economic Analysis), University of Waikato Migration is at historically high levels and more than a quarter of the New Zealand population was born overseas. Yet immigration remains a deeply contentious issue, with the debate more often shaped by emotion than evidence. Julie Fry and Peter Wilson have developed a new framework that broadens the scope of how we consider migration policy. Rather than just considering the effect of migration on GDP, they look at factors such as the Treaty of Waitangi. Their goal? Migration policy that acknowledges the complexity of the world we all inhabit.