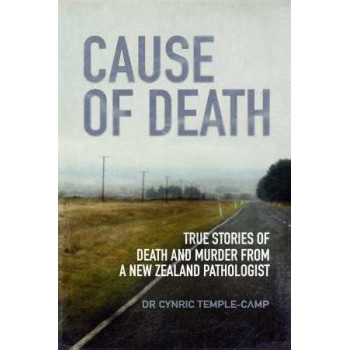 Cause of Death : True Stories of Death and Murder from a New Zealand Pathologist

Strange and shocking stories of death and murder in provincial New Zealand You won't believe these stories happened in New Zealand...Forensic and coronial pathologist Dr Cynric Temple-Camp lifts the lid on some of the most fascinating cases he's worked on during his 30-year career as a corpse investigator. Written with all the gritty detail of a Patricia Cornwell novel, the intrigue of Making a Murderer, and the horror of True Detective, this is a brilliantly told collection of true stories from a rural pathologist, including the high-profile Lundy murders. Told with great skill, full of suspense, cliff-hangers and bizarre and surprising twists in the narrative - most of the examinations are at crime scenes, and there's a real sense of adventure as Dr Temple-Camp heads off, often in the middle of the night, into the unknown. A forensic pathologist is, in Dr Temple-Camp's own words: 'Someone who cuts up the dead to find out why they died.' Dr Temple-Camp's stories of spontaneous combustion, a gruesome murder right beneath the control tower at Christchurch Airport, a mysterious death in an historic homestead, rare diseases, drug-mules, devil-worshippers, cot-deaths, land-mark cases, exhumations, are all from our own backyard. This book will shock and entertain, make you squirm but also occasionally pull at the heartstrings.