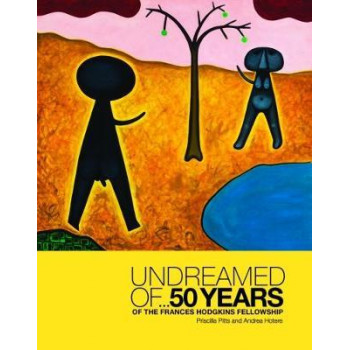 Undreamed of ...: 50 Years of the Frances Hodgkins Fellowship

In 1966 Michael Illingworth, whose oil painting Adam and Eve appears on the front cover of this book, was awarded the inaugural Frances Hodgkins Fellowship. For the first time in New Zealand a practising artist was given a studio and paid a salary to make art for a whole year. Such support, as Frances Hodgkins herself wrote from her own experience, was capable of yielding up riches undreamed of . Poet and critic David Eggleton has described the fellowship as an emblem of cultural endeavour which ...holds a legendary status in the public imagination. The initiative and much of the early funding for the fellowship is thought to have come from poet, editor and arts patron Charles Brasch, and it was set up by the University of Otago Council. Fifty years later, the Frances Hodgkins is still going strong, one of five arts fellowships offered through the University of Otagos Humanities Division. This sumptuous book brings together the art and the stories of half a century of Frances Hodgkins fellows. Arts commentator Priscilla Pitts writes about their work, while journalist Andrea Hotere interviews the artists about their lives and sources of inspiration. The result is a vibrant celebration the of talent fostered through New Zealands foremost visual arts residency, showing how the artistic wealth created has flowed back into the culture of the small country that nurtured it.