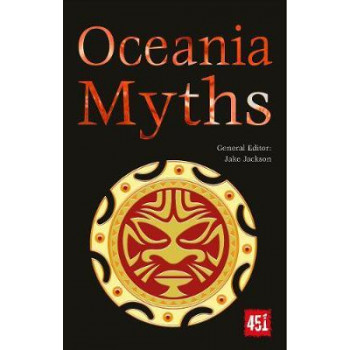 The Polynesian triangle covers Easter Island, Hawaii, New Zealand and the many isles in between. The legends of the region are based on the creation of land, fish, sea, valleys and the volcanic outcrops scattered across the long stretches of the Pacific. The beautiful myths of the ancient Polynesians are brought together in this new collection: from Hawaii the Rainbow Maiden of Manoa undulates through the valleys and rainbow mists; the creator Maui releases his fish hooks into the sea to raise the islands to the surface; and tales of Pele the Fire Goddess, who hurls fountains of molten rock into the air creating vast flows of lava. From the Maori of New Zealand come the strange fruit of darkness, the tales of Tiki and the Great Mother from whom the gods descend, then humankind. And from Polynesia, more legends of Maui creating the ancestors, and Hina the moon goddess. Such myth-making joy creates a rare unity in diversity as the ancient Polynesians strove to explain the beauty and darkness of their lush ocean worlds, now offered in this new selection of myths and legends. AUTHOR: Jackson is General Editor of The World's Greatest Myths and Legends series, with titles including 'Myths of Babylon', 'Indian Myth', 'Egyptian Myth', 'Norse Myth' and 'Polynesian Island Myth'. He is editor of 'Myths and Legends' and foreword writer for 'Celtic Myths and Tales'. Other related work includes articles on the Philosophy of Time, 'Macbeth, A Gothic Chaos' and William Blake's use of mythology in his visionary literature. 10 illustrations