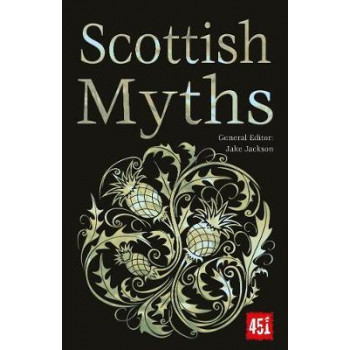 From the myths it shares with Ireland, to its own evocative fairy tales featuring all manner of water spirits, selkies, sea monsters and fairies; from legends of witchcraft ('The Brownie') to ghostly tales of the dead arisen ('MacPhail of Usinnis'), Scottish mythology is presented here in a uniquely Caledonian collection of stories. Much of Scottish mythology was imported by settlers arriving from across the Irish Sea, and so Scottish mythology in large part shares its characters and tales with the mythology of Ireland, from the Ulster Cycle featuring Conchobar mac Nessa, king of Ulster, and the great hero Cuchulainn, to the adventures of Fionn mac Cumhaill. But Scotland also possesses its own folklore and tales featuring kings, water spirits, selkies, sea monsters and fairies, not to mention some Arthurian myths native to this land. From legends of witchcraft such as 'The Brownie', to ghostly tales of the dead arisen ('MacPhail of Usinnis'), this entertaining collection gathers the ancient myths and fairy tales featuring all manner of creatures into a uniquely Caledonian set of stories. FLAME TREE 451: From mystery to crime, supernatural to horror and myth, fantasy and science fiction, Flame Tree 451 offers a healthy diet of werewolves and mechanical men, blood-lusty vampires, dastardly villains, mad scientists, secret worlds, lost civilisations and escapist fantasies. Discover a storehouse of tales gathered specifically for the reader of the fantastic. AUTHOR: Jake Jackson has written, edited and contributed to over 20 books. Related works include studies of Babylonian creation myths, the philosophy of time and William Blake's use of mythology in his visionary literature. SELLING POINTS: Captures the drama and mystery of ancient legends A carefully considered selection of key tales of gods, heroes and adventures Features an introduction to the characters, landscape and culture Part of a new series on The World's Greatest Myths and Legends 10 illustrations