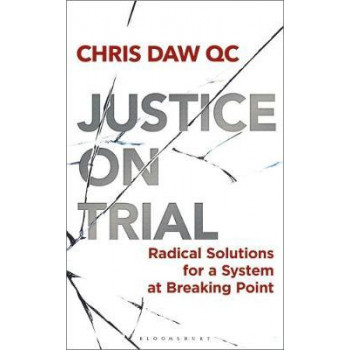 Justice on Trial: Radical Solutions for a System at Breaking Point

Almost everything we think about crime and punishment is wrong. I am going to show you why. And what we can do about it. Chris Daw QC has been practising criminal law for over 25 years, navigating Britain's fractured justice system from within. He has looked into the eyes of murderers, acted for notorious criminals, and listened to the tangled tales woven by fraudsters, money launderers and drug barons. Yet his work takes place at the heart of a system at breaking point - one which is failing perpetrators, victims and society - and now he is convinced that something must change. For most of us the criminal law only matters when we are victims of crime or are called for jury service. But what if everything we have been told about crime and punishment is wrong? What if the whole criminal justice system is a catastrophic waste of money, churning out lifelong criminals, dragging children into court from as young as ten, and fighting a war on drugs that can never be won? Drawing on his own fascinating case histories and global reporting, including the 2019 London Bridge attacks, Alabama's prison system and one of Britain's most dramatic mass shootings, Daw presents a radical new set of solutions for crime and punishment. By turns shocking, moving and pragmatic, Justice on Trial offers rare inside access to a system in crisis and a roadmap to a future beyond the binary of 'good' and 'evil'.