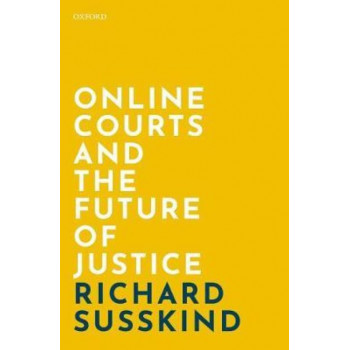 Online Courts and the Future of Justice

In Online Courts and the Future of Justice, Richard Susskind, the world's most cited author on the future of legal services, shows how litigation will be transformed by technology and proposes a solution to the global access-to-justice problem.In most advanced legal systems, the resolution of civil disputes takes too long, costs too much, and the process is not just antiquated; it is unintelligible to ordinary mortals. The courts of some jurisdictions are labouring under staggering backlogs - 100 million cases in Brazil, 30 million in India.More people in the world now have internet access than access to justice. Drawing on almost 40 years in the fields of legal technology and jurisprudence, Susskind shows how we can use the remarkable reach of the internet (more than half of humanity is now online) to help people understand and enforce their legal rights.Online courts provide 'online judging' - the determination of cases by human judges but not in physical courtrooms. Instead, evidence and arguments are submitted through online platforms through which judges also deliver their decisions.Online courts also use technology to enable courts to deliver more than judicial decisions. These 'extended courts' provide tools to help users understand relevant law and available options, and to formulate arguments and assemble evidence. They offer non-judicial settlements such as negotiation and early neutral evaluation, not as an alternative to the public court system but as part of it.A pioneer of online courts, Susskind maintains that they will displace much conventional litigation. He rigorously assesses the benefits and drawbacks, and looks ahead, predicting how AI, machine learning, and virtual reality will likely come to dominate court service.