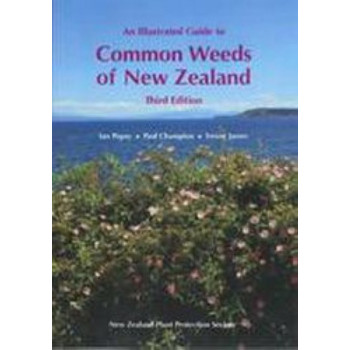 Aimed at a wide audience, with colour photographs and simple text, this popular and indispensable guide to the identification of weeds in New Zealand is now in its third edition. The 2010 edition is bigger and better, with just over 600 species and more than 1500 stunning new photographs which provide an excellent aid to identification. Species are listed in four groups : Plants with spores -- Plants with cones -- plants with flowers - Dicotyledons and -- Plants with flowers - Monocotyledons. the authors remind us that "The definition of a weed as a plant growing in the wrong place means that one person's weed is another's treasure". Their intention was to include all common weeds, including garden escapes, introduced plants, and some plants which may be useful pasture components but which can be a nuisance in the garden or in horticultural crops. Native species which are major weed problems of pastoral land in some regions are listed, and other native species are listed due to their similarity of appearance to a weed in order to avoid misidentification. each plant receives a general introduction, and is then described in detail; the usefulness or toxicity of the plant is also addressed and derivation of botanical names is given. Plants are listed by both botanical and common names, and indexes enable easy searching, but for those unfamiliar with a plant there is a section to help identify a plant from information about flower colour and size, the kind of plant it is and where it occurs. The text has been updated to accommodate changes to the legislation governing pest plants.