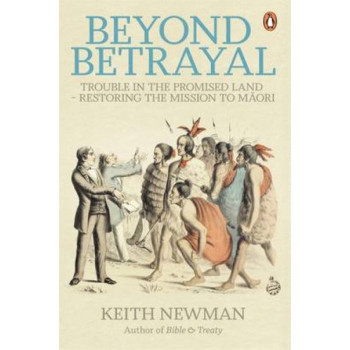 Beyond Betrayal: Trouble in the Promised Land - Restoring the Mission to Maori

Beyond Betrayal delves into New Zealand's pioneering history, and asks why such promising partnerships descended into decades of distrust. After the Treaty of Waitangi was signed, a succession of governors resisted missionary advice, despite their local knowledge and peacemaking skills, and influenced a raft of misunderstandings that provoked violent outbreaks across the country. The rise of Maori prophetic movements, and an intense desire for Maori to have a unified political voice, saw allegiances split between those supporting the government and those frustrated at failed Treaty promises. The pressure to surrender tribal lands had the same impact - a shattered economy and a dispossessed people. The thrilling follow-up to Keith Newman's bestselling Bible & Treaty, Beyond Betrayal looks behind the events that led to the first Maori land protests, and follows the unfolding drama through the stories of the early missionaries and Maori heroes of the faith. These dramatic and heartrending tales of injustice, sacrifice and redemption form an important and often misunderstood backdrop to the wider New Zealand story - one of the most turbulent periods in our history, told with skill, sensitivity and heart.