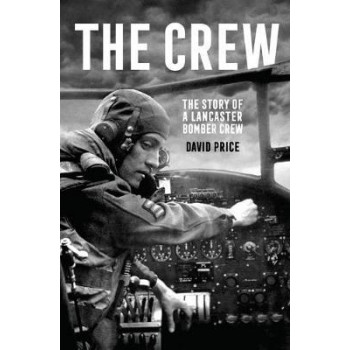 The intimate telling of the life of an Avro Lancaster crew during World War Two, bringing together the story of this iconic RAF bomber and its service with the lives of those who flew her. A moving tribute to the sacrifice and bravery of the fliers of RAF Bomber Command. The Crew , based on interviews with Ken Cook, the crew's sole surviving member, recounts the wartime exploits of the members of an Avro Lancaster crew between 1942 and the war's end. Gloucestershire-born bomb aimer Ken Cook, hard-bitten Australian pilot Jim Comans, Navigator Don Bowes, Upper Gunner George Widdis, Tail Gunner 'Jock' Bolland, Flight Engineer Ken Randle and Radio Operator Roy Woollford were seven ordinary young men living in extraordinary times, risking their lives in freedom's cause in the dark skies above Hitler's Reich. From their earliest beginnings - in places as far apart as a Cotswold village and the suburbs of Sydney - through the adventure of training in North America and the dread and danger of the forty-five bombing raids they flew with 97 Squadron, David Price describes the crew's wartime experiences with human sympathy allied to a secure technical understanding of one of the RAF's most iconic aircraft. The drama and anxiety of individual missions - to Kassel, Munich and Augsburg as well as Berlin - is evoked with thrilling immediacy; while the military events and strategic decisions that drove the RAF's area bombing campaign against Nazi Germany are interwoven deftly with the narrative of the crew's operational careers. Reviews: 'A sensitive account of the bomber's life ... Price has given the bomber offensive a human face. This book [...] has a heart and soul' The Times . 'A fascinating and fast-paced account of the exploits of an Avro Lancaster bomber crew from 97 Squadron RAF' The Herald . 'A remarkable insight into the bravery, determination and skill of British Bomber Command crews during WWII' Waterstones .