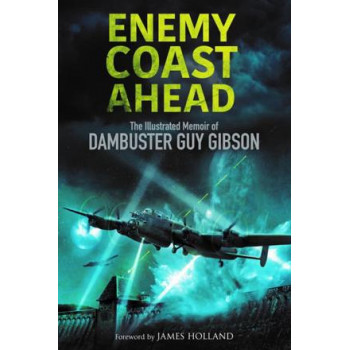 Enemy Coast Ahead: The Illustrated Memoir of Dambuster Guy Gibson

Prior to World War Two, Wing Commander Guy Gibson joined the Royal Air Force. In 1944, he wrote down his experience of serving in the RAF. Aged just 25, Gibson had completed two full tours, each of 30 operations, with Bomber Command, and had led the now-famous Dam Busters raid against the dams of the Ruhr Valley in May 1943. He died aged 26 in 1944, when his Mosquito crashed near Steenbergen in the Netherlands. Gibson's story is an incredible one. He struggled daily to work the Handley Page Hampden, and then the Avro Manchester, flying both into enemy airspace with great difficulty. He goes into detail on this, describing the troubles facing him, and how he managed to overcome them. He also addresses the rapid professionalisation of the Bomber Command. At the start of the war, they seemed ill-equipped and unprepared to confront Germany, but they grew in confidence and stature, to represent one of the defining units of the Second World War. Gibson recounts this change. AUTHOR: Born in India in 1918, Guy Gibson grew up in India, Cornwall, Kent and Oxford. An average student, Gibson always had a passion for flying, and commenced flying training in November 1936 at the Bristol Flying School. In early 1937, he began RAF basic training at RAF Uxbridge, and was awarded his pilot's wings in May 1937. During the war, Gibson was part of three operational tours, with Bomber Command and Fighter Command, playing an important part in the decisive Battle of Britain. He gained notoriety for the Dam Busters raid where he led his squadron. He was awarded the VC and in June 1943 became the most highly decorated serviceman in the country. James Holland is a historian and broadcaster. The author of the best-selling Fortress Malta, Battle of Britain, and Dam Busters, he has written 9 works of historical fiction. He regularly appears on television and radio and has written and presented the BAFTA-shortlisted BBC documentaries, Battle of Britain and Dam Busters. Dr Robert Owen is the Official Historian of the No. 617 Squadron Association. A Trustee of both this Association and the Barnes Wallis Memorial Trust, he has contributed to numerous publications and documentaries. He is the author of Henry Maudslay Dam Buster and lead author on Dam Busters Failed to Return. 100 colour and b/w illustrations