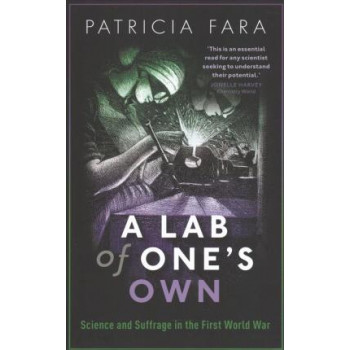 A Lab of One's Own: Science and Suffrage in the First World War

2018 marked a double centenary: peace was declared in war-wracked Europe, and women won the vote after decades of struggle. A Lab of One's Own commemorates both anniversaries by revealing the untold lives of female scientists, doctors, and engineers who undertook endeavours normally reserved for men. It tells fascinating and extraordinary stories featuring initiative, determination, and isolation, set against a backdrop of war, prejudice, and disease. Patricia Fara investigates the enterprising careers of these pioneering women and their impact on science, medicine, and the First World War. Suffrage campaigners aligned themselves with scientific and technological progress. Defying protests about their intellectual inferiority and child-bearing responsibilities, during the War they won support by mobilizing women to enter conventionally male domains. A Lab of One's Own focuses on the female experts who carried out vital research. They had already shown exceptional resilience by challenging accepted norms to pursue their careers, now they played their part in winning the War at home and overseas. In 1919, the suffragist Millicent Fawcett declared triumphantly that 'The war revolutionised the industrial position of women. It found them serfs, and left them free.' She was wrong: Women had helped the country to victory, had won the vote for those over thirty - but had lost the battle for equality. A Lab of One''s Own is essential reading to understand and eliminate the inequalities still affecting professional women today.