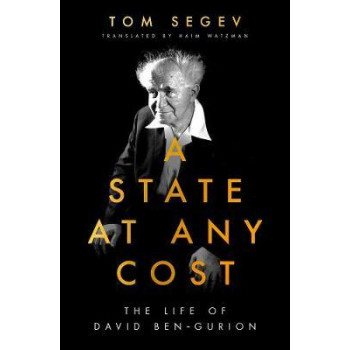 State at Any Cost: The Life of David Ben-Gurion, A

A biography of Israel's most iconic and controversial statesman. 'Tom Segev's meticulously researched and most elegantly written new biography of David Ben-Gurion is a must for anybody interested in both the glorious and the dark pages of the history of Zionism and Israel, as reflected throughout the life and times of the Jewish State's most important founding father' Saul Friedlander, Pulitzer Prize-winning author of Nazi Germany and the Jews and Where Memory Leads . ' A State at Any Cost deserves to be the definitive biography of Ben-Gurion. It is the story of a hard-headed, pragmatic and ruthless politician, told without sentimentality or nostalgia. It also serves as a key to understanding today's Israel, which is still very much Ben-Gurion's creation' The Times . As the founder of Israel, David Ben-Gurion long ago secured his reputation as a leading figure of the twentieth century. Determined from an early age to create a Jewish state, he took control of the Zionist movement, declared Israel's independence, and navigated his country through wars, controversies and remarkable achievements. In this definitive biography, Tom Segev uses previously unreleased archival material to give an original, nuanced account that transcends the myths and legends that have built up around the man. He reveals Ben-Gurion's secret negotiations with the British on the eve of Israel's independence, his willingness to countenance the forced transfer of Arab neighbours, his relative indifference to Jerusalem, and his occasional eccentric moments - from UFO sightings to plans for Israel to acquire territory in South America. The result is a full and startling portrait of a man who sought a state 'at any cost' - at times through risk-taking, violence, and unpredictability, and at other times through compromise, moderation and reason. Segev's Ben-Gurion is neither a saint nor a villain but a twentieth-century leader whose iron will and complex temperament left a contentious legacy, and one of the world's most intractable national conflicts.