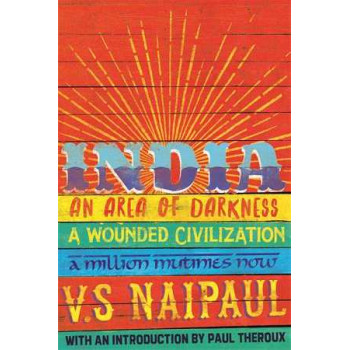 With an introduction from Paul Theroux V.S. Naipaul first visited India in 1962 at twenty-nine. His most recent visit was in 2015 at eighty-two. The intervening years and visits sparked by an inquisitiveness about a country he had never seen but had been a dream of his since childhood have resulted in three books: India: An Area of Darkness, A Wounded Civilization and A Million Mutinies Now. India is the collection of all three, introduced by fellow traveller and writer Paul Theroux. An Area of Darkness is V. S. Naipaul's semi-autobiographical account - at once painful and hilarious, but always thoughtful and considered - of his first visit to India, the land of his forebears. From the moment of his inauspicious arrival he experienced a cultural estrangement from the subcontinent. India was land of myths, an area of darkness closing up behind him as he travelled. What emerged was a masterful work of literature that provides a revelation both of India and of himself: a displaced person who paradoxically possesses a stronger sense of place than almost anyone. India: A Wounded Civilization casts a more analytical eye than before over Indian attitudes, while recapitulating and further probing the feelings aroused in him by this vast, mysterious, and agonized country. A work of fierce candour and precision, it is also a generous description of one man's complicated relationship with the country of his ancestors. India: A Million Mutinies Now is the fascinating account of Naipaul's return journey to India and offers a kaleidoscopic, layered travelogue, encompassing a wide collage of religions, castes, and classes at a time when the percolating ideas of freedom threatened to shake loose the old ways. The brilliance of the book lies in Naipaul's approach to a shifting, changing land from a variety of perspectives. India: A Million Mutinies Now is a truly perceptive work whose insights continue to inform travellers of all generations to India.