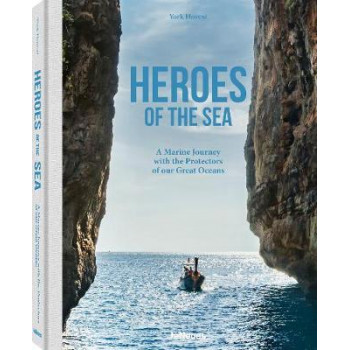 Heroes of the Sea

From time immemorial, we humans have felt drawn to the magic of the sea, to its power and unpredictability. Today, however, our oceans are threatened as never before. Plastic pollution, climate change, and industrial fishing are putting at risk the very existence of untold species. York Hovest has taken it upon himself to step up in the face of these challenges. He sought out and accompanied all sorts of "heroes of the sea": scientists, activists and visionaries who have launched projects to tackle the problem of how to save our oceans. It led him on numerous journeys to every corner of the earth and resulted in this one-of-a-kind photography volume that reveals both the undisguised beauty of the seas as well as the threats this unique world faces both above and below the surface. Hovest's pictures span the azure blue seas of the South Seas to the cold waters around the Arctic Circle. They show whales, sharks, and colorful reef inhabitants in their natural habitat. In breathtaking splendor and scope, they remind us of the immense diversity and beauty of marine life and urge us to protect the abundant life forms for whom the ocean is home. York Hovest, born in 1978 in Wesel, North Rhine-Westphalia, Germany, is an investigative photographer, author, and adventurer who travels the world in search of inspiring stories and destinies. In his new project "Heroes of the Sea," he accompanies people who have dedicated themselves to saving the oceans. He is a sought-after guest in the media, a keynote speaker, and formerly an internationally successful fashion photographer. A portion of the proceeds of this book will be donated to the marine conservation organization Sea Shepherd Global. Sea Shepherd fights against illegal fishing, the slaughter of marine mammals, and ocean pollution. The book comes without plastic wrapping. Let's keep the seas safe.