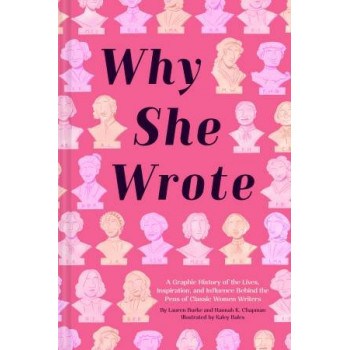 Why She Wrote: A Graphic History of the Lives, Inspiration, and Influence Behind the Pens of Classic Women Writers

In Why She Wrote, dive into the fascinating, unexpected, and inspiring stories behind the greatest women writers in the English language. This compelling graphic collection features 18 women-including Jane Austen, Louisa May Alcott, Alice Dunbar Nelson, Anne Lister, and more-and asks a simple question: in a time when being a woman writer often meant being undervalued, overlooked, or pigeonholed, why did she write? Why did Jane Austen struggle to write for five years before her first novel was ever published? How did Edith Maude Eaton's writing change the narrative around Chinese immigrant workers in North America? Why did the Bronte sisters choose to write under male pennames, and Anne Lister write her personal diaries in code? Learn about women writers from the 18th, 19th, and early 20th centuries, from familiar favorites to those who have undeservedly fallen into obscurity, and their often untold histories, including: * The forgotten mother of the gothic genre * The unexpected success of Little Women * The diaries of the "first modern lesbian" * The lawsuit to protect Little Lord Fauntleroy * The personal account of a mastectomy in 1811 * Austen's struggles with writer's block * And much, much more! Why She Wrote highlights a significant moment from each writer's life and retells it through engaging and accessible comics, along with biographical text, bibliographies, and fun facts. For aspiring writers, literary enthusiasts, and the Janeite who has everything, this new collection highlights these incredible women's hardships, their influence, and the spark that called them to write. * GREAT GRAPHIC NOVEL FOR ALL AGES: Librarians and teachers recommend graphic novels for readers of all ages, especially beloved nonfiction titles like Marjane Satrapi's Persepolis and Raina Telgemeier's Smile, Sisters, and Guts. Immerse yourself in the stories of these fascinating women through the fun, approachable, and dynamic medium of the graphic novel! * CELEBRATION OF WOMEN WRITERS: Want to read more books by historical women writers, but aren't sure where to start? The stories and bibliographies of the women featured in Why She Wrote is an inspirational deep dive. * OVERVIEW OF WOMEN'S HISTORY: Add it to the shelf alongside other collections of women's history, including Women in Science: 50 Fearless Pioneers Who Changed the World by Rachel Ignotofsky, Brazen: Rebel Ladies Who Rocked the World by Penelope Bagieu, and Amazons, Abolitionists, and Activists: A Graphic History of Women's Fight for Their Rights by Mikki Kendall and A. D'Amico.