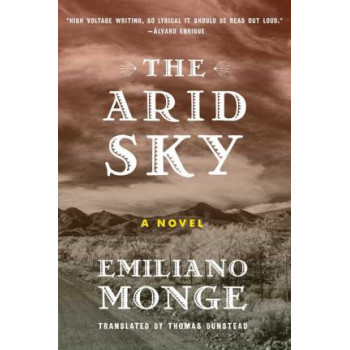 Described as "a literary atomic bomb" (Luisan Gamez), Mexican literary star Emiliano Monge's English-language debut is the Latin American incarnation of Cormac McCarthy: an artistically daring, gorgeously wrought, and eviscerating novel of biblical violence as told through the story of a man "who, though he did not know it, was the era in which he lived." Set on a desolate, unnamed mesa, Emiliano Monge's The Arid Sky distills the essence of a Latin America ruthlessly hollowed out by uncontainable violence. This is an unsparing yet magnificent land, whose only constants are loneliness, hatred, loyalty, and the struggle to return some small measure of meaning to life. Thundering and inventive, The Arid Sky narrates the signature moments in the life of German Alcantara Carnero: a man who is both exaltedly, viscerally real and is an ageless, nameless being capable of embodying entire eras, cultures, and conflicts. Monge's roadmap-an escape across borders, the disappearance of a young girl, the confrontation between a father and his son, the birth of a sick child, and murder-takes readers on a journey to the core of humankind that posits a challenge of the kind only great literature can pose.