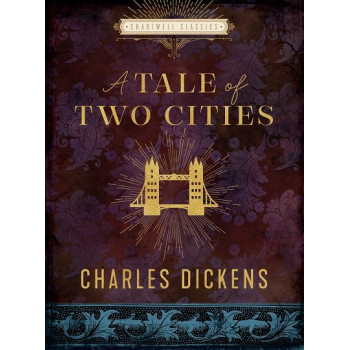 A Tale of Two Cities

Explore Dickens' classic tale of order and disorder, death and resurrection with A Tale of Two Cities. Taking place in London and Paris in the eighteenth century, in the years leading up to and during the French Revolution, Charles Dickens' A Tale of Two Cities is one of injustice, revenge, rebirth, love, and sacrifice. Originally published in thirty-one weekly installments in 1859, this novel is uncharacteristic for Dickens as it lacks comic relief, as well as a protagonist, though London and Paris are considered to be the true protagonists of the story. The turbulence found in this epic tale is also believed to reflect the turmoil in Dickens' personal life at the time. Complete and unabridged, A Tale of Two Cities is an essential collectible that features an introduction by English literature scholar Brian Bartell and a timeline of the life and times of Charles Dickens. Essential volumes for the shelves of every classic literature lover, the Chartwell Classics series includes beautifully presented works and collections from some of the most important authors in literary history. Chartwell Classics are the editions of choice for the most discerning literature buffs. Other titles in the Chartwell Classics Series include: Complete Fiction of H.P. Lovecraft; Complete Grimm's Fairy Tales; Complete Novels of Jane Austen; Complete Sherlock Holme; Complete Tales & Poems of Edgar Allen Poe; Complete Works of William Shakespeare; Divine Comedy; Alices Adventures in Wonderland and Other Tales;The Essential Tales of H.P. Lovecraft; The Federalist Papers; The Inferno; The Call of the Wild and White Fang; Moby Dick; The Odyssey; Pride and Prejudice; The Essential Grimm's Fairy Tales; Emma; The Great Gatsby; The Secret Garden; Anne of Green Gables; The Essential Tales and Poems of Edgar Allan Poe; The Phantom of the Opera; The Communist Manifesto and Das Kapital; Republic; Frankenstein; Twenty Thousand Leagues Under the Sea; The Picture of Dorian Gray; Meditations; Wuthering Heights; Alice's Adventures in Wonderland and Through the Looking-Glass; Beowulf; The Strange Case of Dr. Jekyll and Mr. Hyde and Other Stories; Adventures of Huckleberry Finn; Little Women