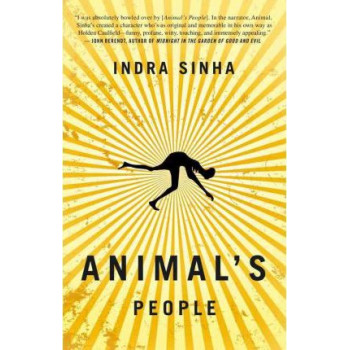 In this Booker-shortlisted novel, Indra Sinha's profane, furious, and scathingly funny narrator delivers an unflinching look at what it means to be human. I used to be human once. So I'm told. I don't remember it myself, but people who knew me when I was small say I walked on two feet, just like a human being... Ever since he can remember, Animal has gone on all fours, his back twisted beyond repair by the catastrophic events of "that night" when a burning fog of poison smoke from the local factory blazed out over the town of Khaufpur, and the Apocalypse visited his slums. Now just turned seventeen and well schooled in street work, he lives by his wits, spending his days jamisponding (spying) on town officials and looking after the elderly nun who raised him, Ma Franci. His nights are spent fantasizing about Nisha, the girlfriend of the local resistance leader, and wondering what it must be like to get laid. When Elli Barber, a young American doctor, arrives in Khaufpur to open a free clinic for the still suffering townsfolk--only to find herself struggling to convince them that she isn't there to do the dirty work of the Kampani--Animal gets caught up in a web of intrigues, scams, and plots with the unabashed aim of turning events to his own advantage. Profane, piercingly honest, and scathingly funny, Animal's People illuminates a dark world shot through with flashes of joy and lunacy. A stunning tale of an unforgettable character, it is an unflinching look at what it means to be human: the wounds that never heal and a spirit that will not be quenched.