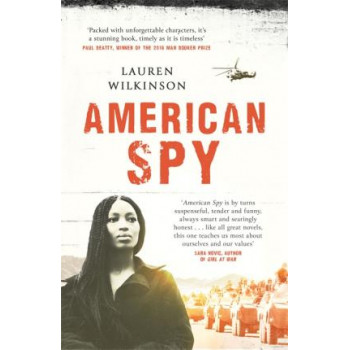 LITERARY HUB MUST READ BOOKS OF 2019 'This unflinching debut combines the espionage novels of John le Carre with the racial complexity of Ralph Ellison's INVISIBLE MAN' Publishers Weekly 'With unforgettable characters, it's a stunning book, timely as it is timeless' Paul Beatty, Winner of the 2016 Man Booker Prize 'Like all great novels, this one teaches us most about ourselves and our values' Sara Novic, author of GIRL AT WAR * * * * * "My most important secret--and this is how I met my sons' father--is that I was once a spy." It's 1986, the heart of the Cold War, and Marie Mitchell is an intelligence officer with the FBI. She's brilliant and talented, but she's also a black woman working in an all-white boys' club, and her career has stalled with routine paperwork--until she's recruited to a shadowy task force aimed at undermining Thomas Sankara, the charismatic, revolutionary president of Burkina Faso, whose Communist ideology has made him a target for American intervention. In the year that follows, Marie will observe Thomas, seduce him, and ultimately, have a hand in the coup that will bring him down. But doing so will change everything she believes about what it means to be a spy, a lover, and a good American. Inspired by true events--Thomas Sankara is known as "Africa's Che Guevara," but his story is not widely known in the United States--this novel is sweeping historical fiction with an enthralling espionage thriller at its core, and introduces a powerful new literary voice.