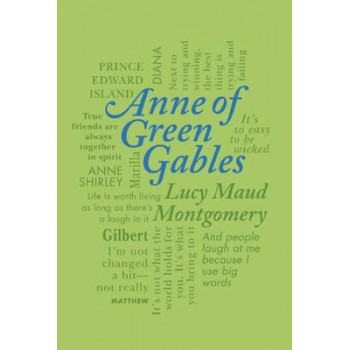 Best-selling Canadian author Lucy Maud Montgomery published the first book in her charming series in 1908, making it a literary favorite for more than a hundred years. Published as a children's novel, the story of Anne Shirley, an orphan, was inspired by the author's childhood adventures on rural Prince Edward Island. It follows Anne's journey as she moves to a farm on Prince Edward Island to live with a middle-aged brother and sister who had intended to adopt a boy to help them with farming chores. The story follows Anne as she makes a home and comes of age on the island. Anne of Green Gables has been one of the world's most charming coming-of-age stories for more than a century. Lexile score: 970L About the Word Cloud Classics series: Classic works of literature with a clean, modern aesthetic! Perfect for both old and new literature fans, the Word Cloud Classics series from Canterbury Classics provides a chic and inexpensive introduction to timeless tales. With a higher production value, including heat burnished covers and foil stamping, these eye-catching, easy-to-hold editions are the perfect gift for students and fans of literature everywhere.