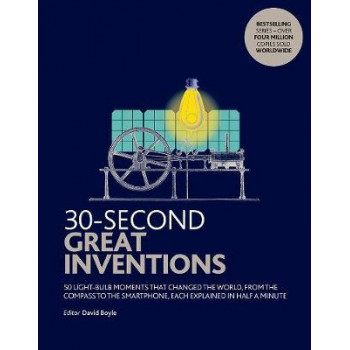 Universal change is often the result of an individual's lightbulb moment - an invention that triggers a ripple effect across countries, continents, or even out into space. 30-Second Great Inventions looks at fifty of these groundbreaking innovations - great ideas that really did change the world. It covers a wide range, from early days (the wheel) through materials (the invention of steel, for example, or plastic) to communications (the alphabet, the printing press, the Worldwide Web) and the conveniences of (relatively) modern daily life (refrigeration, indoor plumbing, central heating). It's a sharp reminder that almost every aspect of life in the second decade of the 21st century is the result of someone's bright idea, - and one that they acted on to turn it into a viable invention. Along the way you'll learn all about the personalities behind the inventions: revealing and intriguing in equal measure.